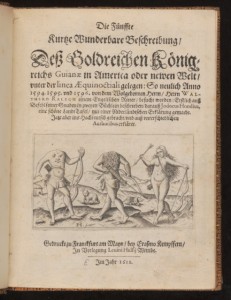 Recently digitized as part of the McGregor Grant digitization project, this title page includes an image of a headless human form representing one of Walter Raleigh’s beliefs from his exploration of Guiana and the Northern part of South America in 1595. 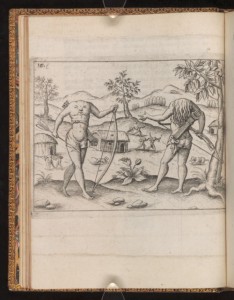 Both these images appear in “Die Funffte kurtze wunderbare beschreibung, dess Goldreichen Konigreichs Guianae in America oder newen Welt”, a translation and abridgement of Sir Walter Raleigh’s “The discouerie of the large, rich, and bevvtiful empyre of Guiana, with a relation of the great and golden citie of Manoa (which the Spanyards call El Dorado) and of the prouinces of Emeria, Arromaia, Amapaia, and other countries, with their riuers, adioyning. Performed in the yeare 1595.”

Quoting from Raleigh’s original English language work, “When I came to Cumana in the West Indies afterwards by chance I spake with a Spaniard dwelling not far from thence, a man of great travel. And after he knew that I had been in Guiana, and so far directly west as Caroli, the first question he asked me was, whether I had seen any of the Ewaipanoma, which are those without heads. Who being esteemed a most honest man of his word, and in all things else, told me that he had seen many of them; I may not name him, because it may be for his disadvantage, but he is well known to Monsieur Moucheron’s son of London, and to Peter Moucheron, merchant, of the Flemish ship that was there in trade; who also heard, what he avowed to be true, of those people.”

In antiquity various species of mythical headless men were rumored to exist in remote parts of the world (see https://en.wikipedia.org/wiki/Headless_men).