One of my favorite things about working here in DPG is the variety of material that I get to work with. Whether it’s newspaper clippings from the Civil War, hand-colored maps from the 1600s, or the personal effects of famous authors, we do get to see some very interesting items come through our door on a regular basis.

One such item came through last week while scanning some facsimile reproductions of a two volume set by Li Shangyin. Opening one of the volumes, somewhere in the middle of the book a dried leaf appeared, kept intact over the years, safely tucked away between the pages. What made this particular leaf more interesting was the hand-painted script that adorned the face – characters in Mandarin written in black ink. 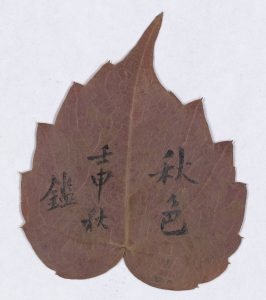 Gifts from the past

Not being fluent in the language, I reached out to the patron who had requested the scans, hoping that she would be able to offer some insight into what the creator had written, or perhaps some other information on the object.

She replied immediately, explaining that the writing on the right said “The color of autumn.” On the left side is the date written in the Chinese calendar system, which she said could be autumn of 1872, but since this calendar system repeats every 60 years, could be 1932 or 1992. Although, these later dates seem less likely due to China’s adoption of the Gregorian calendar in 1912, after which Chinese calendar dates were reserved more for holidays as time passed.

Which really only gives us more questions. Who created this? Clearly it is not a part of the text, but did it come from a student of the author? Or was it someone with great admiration for Chinese poetry? Was it a forgotten bookmark, or was it meant as a surprise gift for the next person to read this book?

The patron thanked me for sharing this little piece of art, simple yet beautiful, that had been long hidden for so many decades. I was happy to share, and really it only makes me curious about what the next treasure will be that lies hidden within the many books and boxes here in the library.